The traditional cuisine of Corfu includes delicacies that will appeal to both the ordinary traveller as well as the most demanding gourmet. They are special flavours that are linked to the place and shape the gastronomic experience typical of the island.

Some dishes may have faded into oblivion or may be found only in a few little tavernas or in homes, but most of these, fortunately, are served at most of the island’s restaurants.

Wild greens. Typical food of rural families. Boiled wild greens in a deep bowl with their broth, and lots of lemon juice and good olive oil.

Corfou. A local cow’s cheese with a particular tang. It was not produced in Corfu until the 1960s, and used the Italian pecorino as a prototype.

Boiled hen with stuffing. A traditional New Year’s dish. After the hen or chicken has been boiled, it is then stuffed with chopped beef, bacon, eggs, thyme, cheese, garlic, oil, parsley and spices, and roasted in the oven.

Salt cod with aioli (garlic sauce). Salted cod, soaked to remove the salt, with garlic sauce, agiada from the Italian aglio – skordalia in Greek – which apart from the usual bread and olive oil also contains blanched almonds and vinegar.

Bianco, from the Italian for white. A way of cooking fish with garlic, parsley, lemon juice, onions, and potatoes. In other words, white or without tomatoes.

Pandespania. Little cakes originating from Spain (pan de Spagnia) brought by Jews fleeing the Spanish Inquisition in 1492. A kind of sponge cake that is both light and fortifying, dusted with confectioner’s sugar.

Papalina. A tiny dark-coloured sardine that becomes a tasty meze when coated with flour and fried with onions.

Pastitsada. One of the island’s signature dishes, it’s made with cockerel or veal, and is often served on holidays or at official dinners. The meat or poultry is browned with spices, onions and garlic, deglazed with red wine, and then simmered with cinnamon, bay leaf, nutmeg, chopped fresh tomato, tomato paste and sugar, in which thick macaroni is cooked at the end. Eaten sprinkled with grated kefalotyri.

Pastitsio Dolce, also called Venetzianiko Pastitsio. A rare Corfiot recipe, left over from the Venetian era, it’s a lavish variation on lasagna, with a melange of pre-cooked meats, which may include veal, pork, chicken, gamebirds, sausages, ham, chicken livers, lard, and hard-boiled eggs, cinnamon, cloves, and white wine, placed between two layers of thick macaroni sprinkled with grated cheese and dill, and enclosed by thick sheets of pasta flora. The result is an unbelievable festival of flavours and textures.

Pastitsio tis Nonnas. Granny’s Pastitsio. Another variation on pastitsio dolce, which would constitute the first course (primo piatto) of a family Sunday lunch. Here the layers of pastry would enclose thick macaroni with tomato sauce, seasoned with salt, pepper, sugar, grated cheese, sliced hard-boiled eggs, ham, salami and meat, which could include finely chopped bits of chicken or lamb or veal with their gravy, topped with grated cheese, pepper and bread crumbs.

Pudding. Custard-based desserts, often containing currants or raisins, left over from the years of the British Protectorate.

Porpetes or Polpettes. Meatballs with tomato sauce. One variation calls for a stuffing of anchovies, bacon, cheese and nutmeg.

Savoro. A piquant sauce also found on other island, containing oil and vinegar, bay leaf, raisins, garlic and rosemary, which is poured over small fried fish and which acts as a preservative.

Sofrito. Another of Corfu’s most famous dishes, along with pastitsada, this consists of thin slices of veal which have been dipped in flour and fried lightly, and then layered with plentyed of finely chopped parsley and garlic, and simmered with oil and white wine vinegar. Served with fava or mashed potato.

Spetseriko. A combination of spices and aromatic herbs like cinnamon, cloves, nutmeg, bay leaf, allspice, cumin, which are added to a stew pot to make the dish tastier.

Stakofisi or Stockfish. Wind-dried (as opposed to salted) cod, which is sauteed with onion and red pepper and then stewed with tomato sauce, leeks and a bit of sugar. This was the bourdeto of the wealthy.

Stoufado. Chunks of veal marinated in wine, onion, finely chopped garlic, carrot, rosemary, sage, thyme, bay leaf and salt and pepper. The meat, after being browned in oil with finely chopped pancetta, is cooked in the marinade to which a little sugar is added.

Sykomaida. Literally fig paste, a sweet in the shape of a hamburger made by kneading dried figs with grape must, ouzo or mastiha, chopped almonds and walnuts, and black pepper, and then wrapped in walnut leaves.

Tzaletia, from the Italian giallo or yellow. Pasta made from cornmeal mixed with wheat flour, fried in olive oil and served with confectioner’s sugar and cinnamon.

Tsilikourda. The Corfiot version of the traditional soup eaten on Easter eve, with the difference that it is not a soup at all, and consists solely of coarsely chopped lamb intestines, which are simmered with finely chopped green onion, parsley, dill, salt, pepper and lemon, and sometimes tomatoes instead of lemon.

Fougatsa. A kind of brioche of Venetian origin, no doubt related to the French fougasse or Italian focaccia.

Hordés. The hordés of antiquity become hardounin in Byzantium, gardoumba in modern Greece, and are the lamb’s innards – liver, lungs, sweetbreads, wrapped in lamb intestine and seasoned with pepper, oregano, oil and lemon juice and roasted in the oven or over charcoal. When spitroasted they are called kokoretsi on the mainland. 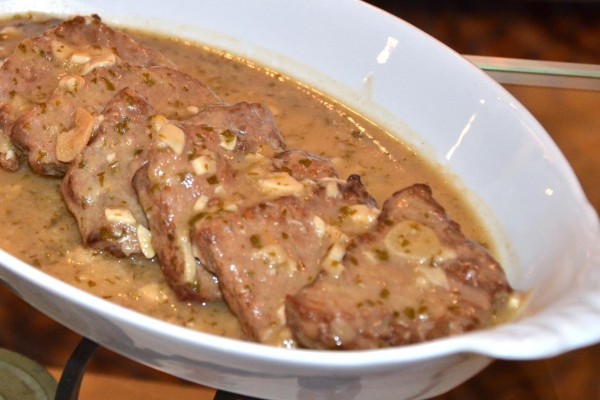 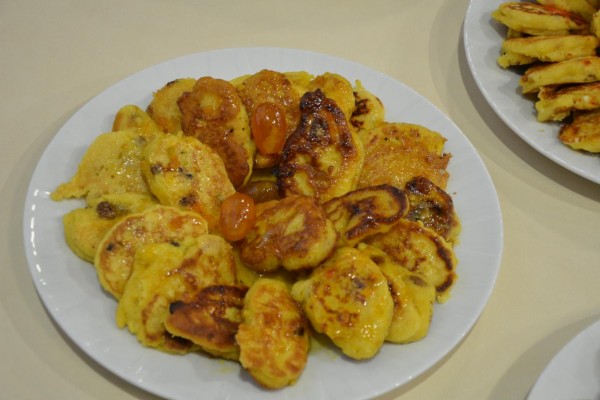 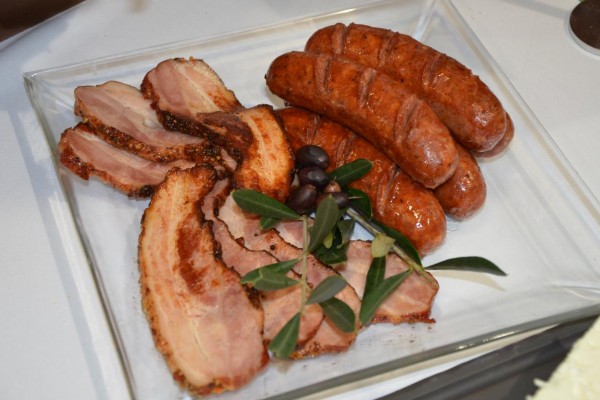 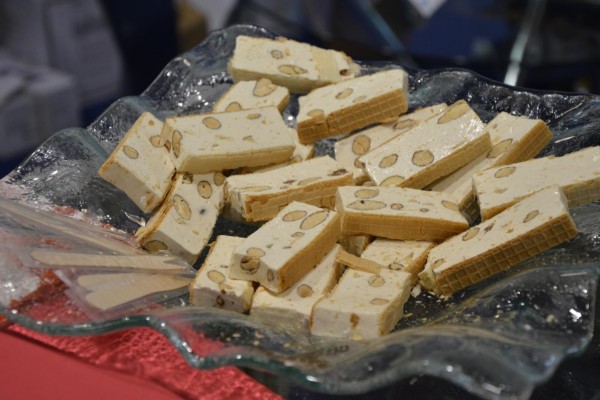 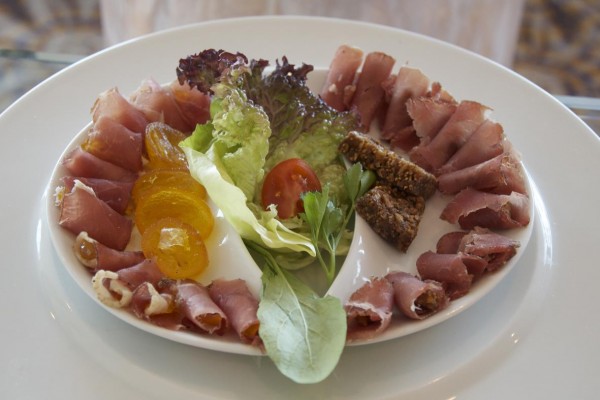 Corfu spent seven centuries under Western domination, a fact that had a decisive effect on the island’s town planning, architecture, art, language, social structure, economy and culture. This influence could not help but extend to Corfu’s gastronomic culture and cuisine.

Under the Byzantines, the local cuisine took a typically Mediterranean form, based on olive oil, wheat, wine, wild greens, and fish. The poorer classes ate very little meat and then only on feast days.

Of the island’s foreign rulers, the French, (whose rule was limited to less than a decade) had a negligible impact, and the British Protectorate 1815-1864 left a legacy of ginger beer and English puddings. The Venetians, on the other hand, overlords for some 400 years, brought immense changes with them. During the Renaissance Venice was at the centre of the spice and sugar trade supplying Europe with luxury and wealth.

Venetian domination of Corfu extended to the kitchen and the Corfiot diet. They introduced new foods from the Americas and Indies and taught the locals how to prepare them. Corn, tomatoes, beans, peppers, coffee and chocolate were among the many items brought to the island by the Venetians, which were soon embraced by the Corfiots into dishes which have come down to us in nearly unaltered form. It is no coincidence that many favorite foods have Italian names and Venetian origins (bianco, bourdeto, noumboulo, salado, panada, papalina, polenta, porpetes, savoro, sofrito, etc.) while evolving over the years into uniquely local specialities.

This Venetian influence was confined to the cooking of the upper classes because of the vast inequality between the landowning aristocracy and the poor farmers. This led to the development of two distinct cuisines on the island, one elaborate and one folk. The former used plenty of meat, fish, and game in conjunction with expensive spices and long preparation times, involving special techniques and intricate combinations. The high-point of this cuisine was Pastistio Dolce, an extremely complicated Venetian recipe that has its origins in ancient Rome.

All this was missing from the cooking of the villages and farms which relied instead on inventiveness and imagination to enhance its humble ingredients. Salt cod was the staple protein in the cuisine of the lower classes, prepared in a wide variety of ways: with leeks and paprika on Sundays, with potatoes and rice for Carnival, roasted with tomatoes and potatoes for the Christmas holidays.

When roads were built in the late 19th and early 20th centuries linking the hinterland with the coastal cities, social inequality decreased and the two cuisines merged into the unified Corfiot cuisine of today. Pasta was no longer imported from Italy solely for the aristocracy and three local factories produced pasta for the entire population who grew very fond of it. Corfu’s high humidity and heavy rainfall required the consumption of plenty of calories and warming foods. The Corfiots found what they were looking for in pasta, hot pepper, garlic, and wine, and thus pastitsada became their most representative dish.

Today many of the traditional recipes are served in several of the island’s restaurants, making it easy for visitors to become acquainted with Corfu’s gastronomic wealth.