In his nineties already, Kostas Miras wont’ give up. You’ll find him there at the kafeneio, day in day out, helping his son. At any chance he gets, kyr Kostas (kyr, added before the name of an old man, is a way to speak about, salute or address him in a respectful way, informal word) speaks about the past:

“The place, as you see it now, is exactly the same as I got it from my father Michalis back in 1952. In the old days, my father used to run it as a grocery store. During the War of 1940, I was only a child and when Aegina was being bombed, I would come here and hide between the sacks of coffee and sugar.

I have been running this place for more than 60 years. Our clientele has always been daily labourers, seamen, fishermen, street smart people. Political discussions are on the order of the day while our kafeneio is also visited by politicians who only remember us when they need our vote during the pre-election period.

Cracking jocks on one-another, teasing one another, and even gossiping is part of our daily routine here; we have to live through this misery and stress somehow, you know. We won’t let them steal our lives away from us after all!”

Kyr Michalis doesn’t mince his words. He cares about the traditional cafés. “Everything points to that we will soon be witnessing the end of kafeneia” he says and his face gets gloomy. I saw his face lit up only once. It was when standing up, full of pride, he showed me the photos on the walls depicting his achievements in football at the age of 20; Kyr Michalis, who played in Saronikos football team as right midfielder, receiving an award by Parliament Member Giorgos Andrianopoulos from the electoral district of Piraeus for his participation in a friendly football game with Olympiakos Football Team! 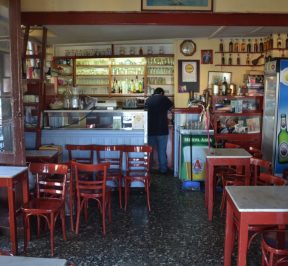