Perhaps the most beautiful route in Greece is the one taken by the famous train on the Diakofto – Kalavryta rack and pinion railway. The little train, which can carry no more than 100 passengers, takes just one hour to complete its journey of 22 km, during which it climbs 750 m above sea level. A regular train would travel at 40 km per hour, but this little train cannot do more than 12 km. As it clings to the track, it reaches an angle of 17.5 % at three different places.

In 1889 Prime Minister Harilaos Trikoupis decided to create a rail line that would unite Diakofto with Tripoli, in the heart of the Peloponnese. The study was undertaken by French engineers who had from the start proposed the electrification of the line through the production of electricity from dams that would be constructed between the 3rd and 15th km, exploiting the river’s water.

Apart from the study and planning of the network by French technicians, many Italian workers were employed on the project, because they had experience building the mountain railroads in the Alps. Be that as it may, the track is considered an amazing feat even by today’s standards.

Thus some 120 years ago, the Diakofto-Kalavryta rack and pinion railway was completed. Starting at the coastal town of Diakofto, it follows the Varouraikos river over bridges and through tunnels, climbing all the way up to Kalavryta.

The train passes through wild landscapes with waterfalls and when it reaches the narrowest point of the route, Portes, the little train enters a tunnel.

The most interesting stop on the way is Megalo Spileo (Big Cave) near the settlement of Kato Zachloros. Here next to the bridge and station the little Romantzo taverna is an exceptional place to have a meal.

Alongside the train tracks there is a path that was once a ‘main thoroughfare’ for local residents. Today the same path has been signed with the symbols of the E4 European network of paths, used by Greek and foreign hikers. The route down takes about 6 hours, the ascent about 7 to 8 hours. It’s very steep. It’s not just the little train that may need a ‘rack and pinion’. But it’s certainly gorgeous. 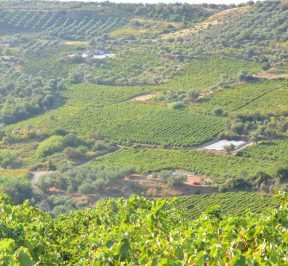