Douglas taverna is a fantastic nibbles eatery (mezedopoleio) on the little port of Koilada in the eastern Peloponnesian district of Ermionida. It serves the hill town of Kranidi, which along with the two nearby islands – Spetses and Hydra – played a key role in the Greek War of Independence (1821) thanks to their shipping fleets. Together with the little-known island of Psara in the Northeast Aegean, they contributed and equipped themerchant vessels that became the Greek Navy.

Next to the harbour and in front of Koilada’s fishing caiques, Takis Basimakopoulos, aka Douglas, has created the most authentic fish taverna in the whole of the Ermionida region.

The source of its genuineness is Douglas himself and his place, which he moved lock, stock and barrel from its previous location.

The interior of the taverna, arranged in a folksystyle by Takis, surprises you with its bold colour combinations and the tasteful placement of decorative objects, among them old black and white photos of Koilada, a coloured photo of his son with a 20-kilo bream, pistols from the Revolution, ships’ rudders and wheels.

Takis has his own way of serving, too. As soon as you’ve sat down, you are presented with a tray laden with the first appetisers: fava, aubergine salad, baked giant beans, marinated anchovies, chickpea fritters, to name a few. After these, Takis comes out to take your order, usually telling his customers what to eat, after you’ve answered the question: “meat or fish?” Of course, his strong point is fish and seafood, because the bay of Koilada is still bountiful with exemplary red mullet, baby calamari, red local shrimp and excellent top grade fish.

The casual nature of the taverna, the service, but also Takis himself – who once he sees his customers happy and satisfied will not hesitate to sit and have a glass and a chat with them – is reflected in the comfortably low prices.

Naturally, the wealthier and often notable visitors to the Ermioni region – also called the Greek Riviera – who may be staying at the ultra luxury Amanzoe resort, make their reservations early so as to be sure of having Douglas’ prime fish and his fish soup, which is another strong card.

“I’m impressed at how much our high society foreign customers like our food. Of course, one would expect them to order lobsters and synagrida (expensive bream), but they also really appreciate our humbler offerings”, Douglas told me.

At Douglas taverna, in these simple surroundings, you find a friendly atmosphere, a fish taverna which is genuine in every way. 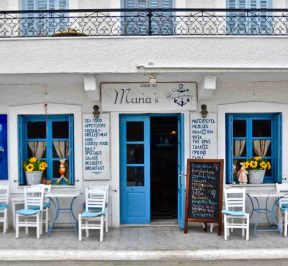