A taverna staple all over Greece, the fava of Santorini is famous for being extra tasty, velvety in texture, incomparably sweet and quick to cook. It is a member of the pea family whose Latin name is Lathyrus Clymenum L. and, based on their finds, archaeologists excavating at the prehistoric site of Akrotiri maintain it was growing on the island 3,500 years ago.

Traditionally planted on December 21st (St. Eleousa’s day), in April it produces its flowers, which are called “Louvi”. In early May, after it has dried on the plant and produced the fruit, it used to be threshed on the threshing floor (nowadays special machines are used) before being hulled and milled.

“Fava Santorinis” was awarded PDO status (Protected Designation of Origin) in 2011 and is extremely nutritious, being rich in both proteins and carbohydrates. Most commonly pureed and served as a dip sprinkled with lemon juice, olive oil and chopped onions, fava of Santorini comes in many other guises: “married” with onions, tomatoes and capers, with pork, with lard and tomato paste, with octopus, as a soup, with rice, in an omelet and ground as a base for fritters.

Nowadays in the hands of young chefs of the island this humble legume has reached an apotheosis, and you may find it as a cream served in shot glasses, in crepes, pies and even ice cream! as well as in sophisticated compositions with meat, fish, game and seafood.

The relationship of fava and tourism is by now unassailable as it is one of the trademark products on which the gastronomic experience is based. Besides being one of the geological and architectural wonders of the world, Santorini is also renowned among food lovers and has deservedly earned the title of the best gastronomic destination in Greece.

Fava cultivation is also very profitable and becoming more so by the year, a golden crop. Look at the figures: in 2008 nine hundred and sixty square metres were cultivated by one hundred producers, while only five years later, more than 2000 square metres of land were planted with fava and the number of farmers had increased to over three hundred. 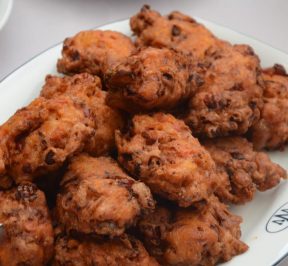