Grigoris Taverna at Pyrgaki is 16 km from Aigio and 25 km from Kalavryta, on the Aigio-Fteri-Kalavryta road, near a small plateau with two names, ‘Arravonitsa’ or ‘Aerodromio’. The drive from Aigio is particularly beautiful as it passes through neat vineyards where both currants and wine grapes are grown. At some point the vineyards stop and the pines begin, followed by fir trees, still scarred by a large fire in 2007.

Pyrgaki is 831 m above sea level and from the taverna you have a view of the whole Gulf of Corinth, while alongside it yawns a deep ravine cut by the Selinounta River which waters the plain of Aigio.

An old, weather-beaten sign at the entrance welcomes you with elegant calligraphy to the Butchershop of Grig. Ang, Georgiou. It also betrays the age of the taverna, which began in 1951 first as a little shop, then as a butcher’s, until it finally morphed into a large taverna known throughout the region since 1981. Until the big fire of 2007, Grigoris Georgiou was also the area’s vet with a stable and cattle. But since then the taverna and a small vineyard keep him fully occupied. The vineyard is planted with Viogner grapes, which he sells to wineries in the area – Rouvalis and Skouras, among others.

Grigoris Taverna’s kitchen – now run by his daughter – serves casseroles like asproyiachni vergadi, dolmades wrapped in phyllo, kid in the tserepa, a sealable metal pot, as well as all kinds of pies (cheese, greens, courgette, and onion). Grigoris himself is in charge of the grill, where different meats turn on the rotisserie – kokoretsi, kontosouvli, spleenantero (delicacies made of innards), lamb, livers – while chops and steaks sizzle on the coals below. 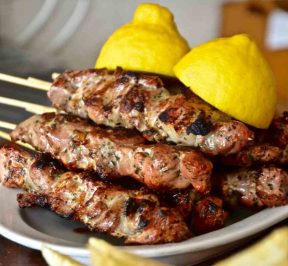 Souvlakia of Zaros at Aigio Tavernas 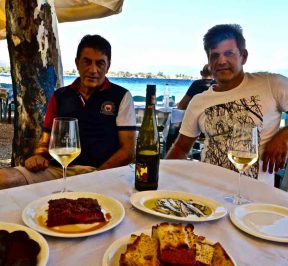 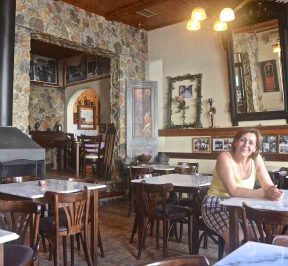