The Heraklion Archaeological Museum in Crete is one of the biggest and most noteworthy museums in Greece and among the most significant museums in Europe. The museum houses representative artifacts from all the periods of Cretan prehistory and history, covering a chronological span of over 5,500 years from the Neolithic to the Roman Period. Its Minoan antiquities collection on exhibit is the most significant collection worldwide. The museum is justly considered as the museum of Minoan civilization par excellence.

The museum is located in the center of Heraklion. Built between 1937 and 1940 and designed by Greek architect Patroklos Karantinos, the museum is a significant example of Greece’s modernist architectural and has received a Bauhaus award.

The colours and the materials used in its construction, such as the veined polychrome marbles, recall certain Minoan wall-paintings which imitate marble revetment.

The archaeological finds displayed in the museum are of sublime beauty and of great historical importance. The museum also houses the Phaistos Disk (17th BC), covered with inscribed signs on both sides, the fresco of “Lilly Prince”, the bull-leapers fresco (during this dangerous athletic event of Minoan Crete, athletes had to leap over the animal’s back and finally land behind it) and the giant mock-up depicting the majestic and labyrinthine multi-storey palace of Knossos. A set of special jars, examples of a culinary civilization, is prominently displayed in the museum.

Clay flask and three rhyta decorated in “Marine Style” with significant naturalistic result. The octopus tentacles writhe around the body of the vase, while additional motifs indicate the seabed (15th BC)

Large storage jars (pithi) decorated with complex relief bands. Jars were manufactured in parts using a mould; the size and quality of their construction proves that they were not only used as utensils but also their holders were both rich and famous (Archaic period, 7th -6th BC). 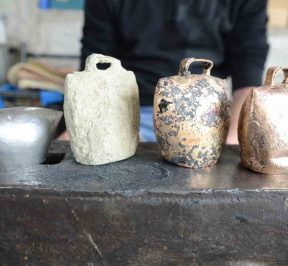 The traditional sheep-bells of Crete Sights 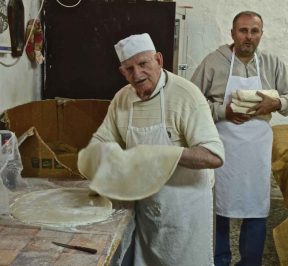 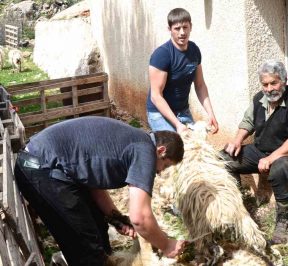 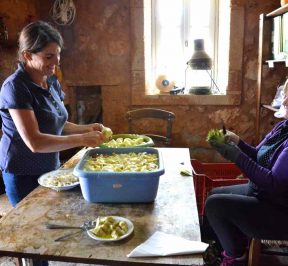