The traditional café of Skoulas in Anogeia

Once in Anogeia, the famed village of Crete nested at the foothills of mount Psiloritis, look to your right. Try spotting the kafeneio (traditional coffee house) “I Platia tou Syntagmatos” (The Constitution Square) of Grylios, possibly the oldest traditional café in Anogeia, lying hidden amidst two mulberry trees.

Inside the kafeneio, two large eye-catching photos of the café owner, Michalos Skoulas, the one taken forty years ago and the other one quite recently, prevail encircled by many other smaller photos and newspaper extracts on the history of Skoulas family and the history of Anogeia.

During German Occupation, when the village of Anogeia was the cradle of the Cretan resistance movement, the abduction of German General Heinrich Kreipe in August 1944 lead to the issuance of an instruction to raze the village to the ground and to execute all men that were to be found on site at the time of the attack. Houses were exploded with dynamite and others set on fire; approximately 800 houses were totally destroyed and turned into absolute ruins. Six women were burned, eight men were executed and eighty elderly were arrested.

The photos mounted on the wall illustrate all these stories and the participation of the family of Skoulas in the resistance, sacrificing their blood on the altar of their homeland’s freedom.

Under the dense shadow of the mulberry tree, elderly masculine men from Anogeia in an upright posture, wearing either a beard or a moustache, dressed in their black Cretan shirts with the traditional kerchief edged with a fringe of tiny little knots wrapped around their head, drink their raki. The memory of the owner Michalos, who passed away in his nineties, is still fresh in the memory of everyone.

The traditional café of Skoulas in Anogeia 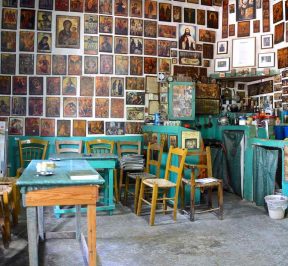 The traditional café of Kostas in Sivas Traditional Cafés 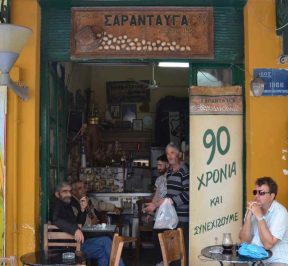