On the island of Crete, apaki (cured pork), a unique Cretan delicacy, is produced by butchers and many well-known processed meat factories, such as Lambrakis, Markakis and Antonakis. Out of those significant local producers, I chose to meet Michalis Vavourakis, a mechanical engineer from Rethymno. Driven by his love for nature and this faith on organic farming and livestock, Michalis Vavourakis, a man that has adopted a philosophical approach to life, decided to dedicate himself to organic pig raising in his own Vavourakis Farm.

Located on a hilltop in the village of Koksare, in the municipality of Rethymno, Vavourakis Farm stretches over an expanse of 170 square meters. In an unspoiled natural landscape, 20 sows and a population of 200 pigs are raised and bred naturally without the use of hormones or medicaments, fed exclusively with the farm’s crops, grains and roots, wild herbs, thyme and certified cereals.

Vavourakis Farm products bear the BIO guarantee label. Here everything is prepared with due care and following old family recipes. The cold cuts of the Farm, such as the boneless steak, the Cretan sausage apaki (apaki is made from lean pork meat that is seasoned in vinegar before it is smoked with local aromatic herbs, such as sage, marjoram and thyme, and then, coated with a layer of spices and herbs, such as cumin, oregano etc. Apaki has a characteristic aromatic, strong and slightly sourish taste and goes perfectly with Cretan tsikoudia or raki), the sausage with thyme (pure work of art, if you ask me) and the sausage with vinegar have fallen in the radar of culinary journalists and are sold in selected shops.

Michalis is a very sweet and modest person who wins you over the moment you meet him. He has many dreams fuelled by his faith in what he does. This artisan producer, a person with concerns and sensitivities, has been blazing his own trail of success. Here is his secret recipe: Cretan flavors on the verge of extinction, Cretan traditional recipes, respect for the environment, traditional livestock breeding methods, modern quality methods for product labeling and promotion, but most of all, ethos, Cretan ethos. This unique characteristic of Greek people that finds its outmost expression in the Cretan soul is culminated during the Fetes of “gouronochara” (literally pig joy). Pig slaughter is revived every autumn in the house of Michalis that is overlooking the Libyan Sea, where Michalis and with friends, among them some of the best cooks of the island, celebrate this ancient custom.

Michalis is very happy since his son, who has followed his father’s steps, took the extra mile and is ready to open a meat processing workshop in the village of Atsipopoulo. We wish him the best of luck. 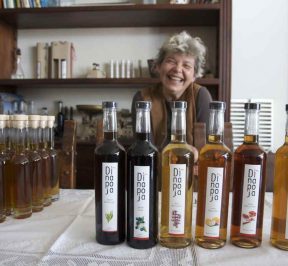