The Maritime Musuem at Oia on Santorini is among the most beautiful maritime museums in Greece.

It was founded by sea captain Antonis Dakronias who had been collecting items related to the island’s naval history since 1951. In 1990 it moved to a beautiful 19th-century ‘captain’s house’ and is devoted to exhibits connected with Santorini’s shipping, particularly during the 19th century when vessels owned by islanders used to cross the whole eastern Mediterranean from the Black Sea to Egypt, carrying either pozzolana for use in the construction of the Suez Canal or Visanto, Santorini’s famous sweet wine, which for many years was used in Orthodox churches in Russia for Holy Communion.

The sailing boats, their captains and crews delivered their cargo and returned loaded with all sorts of valuable merchandiese, along with knowledge, experiences and of course wealth.

Among the museum’s exhibits are rare figureheads, anchors, old cannon, sailors’ chests, sextants, equipment used in the golden age of sail, shipbuilding tools, moulds and forms for ships, models of old and new ships – on the later ships you can see the discreet signage of the local shipowners, Alafouzos and Nomikos – watercolours of lovely ships, rare manuscripts and books, trading contracts and dowry agreements, wills, and a rich photo archive.

This small jewel of a maritime museum encapsulates the history of Santorini shipping and illustrates the extrovert character of the island. 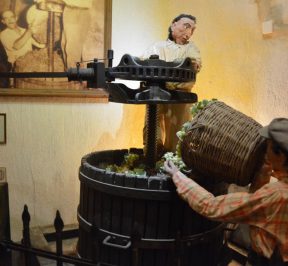