Santorini’s 1,500 hectares of vineyards begin in the western highlands at the edge of the cliffs overlooking the caldera (300 m) and slope downwards to the eastern beaches. Most of the holdings are small and the lion’s share of the crop goes to the 17 wineries. The remainder is kept for home use or provided to local tavernas.

Grape vines account for about 80% of all agriculture on the island. Of the ten best known varieties, pride of place goes to Assyrtiko, followed by Aithani and Athiri among the whites and Mavrotragano and Mandilaria among the reds. Produced in lesser quantities are Rozaki, Aetonyhi, Aspromoschato, Roditis, Moschato, Rousso and Vaftra.

Santorini’s vineyards are a landscape that is the distillation of centuries of human labour, from the terracing to the dry stone walls to the snaking paths that allowed the donkeys to transport the valuable harvest. Cultivating vineyards is hard work; apart from maintaining the terracing, the vines need to be ploughed, pruned, sprayed, and generally cared for to keep losses to a minimum. After the harvest, the grapes must be taken to the kanaves and pressed. Afterwards, the vineyards need to be cleared, the leaves gathered for animal feed, and the twigs saved for winter cooking fires.

Of course this landscape does not represent just hard labour but also joy. After all, the end product is wine and as such highly celebrated with feasts and gatherings. After all the sweat and fatigue came the jokes and the dancing. Who knows how many love affairs began during the harvest or the feasts afterwards? 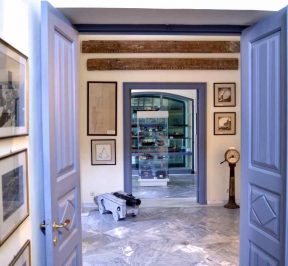 The Maritime Musuem at Oia Sights 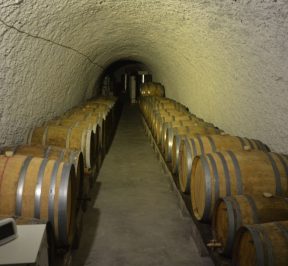