In order to graduate from university, you have to pass exams. Likewise, if you want to graduate from Selene, the temple of gastronomy of Santorini – if not the whole of Greece – you’ll have to take private lessons at Selene Meze & Wine.

Here, in a tastefully decorated vaulted space, three separate “courses” are given.

The first is an all-day affair where each “beginner” can be initiated into the archetypal tastes of Santorini and more advanced novices can experience the creative cuisine of Selene Meze & Wine. Representative dishes on the menu include a selection of Cycladic cheeses and charcuterie, octopus carpaccio with white aubergine salad, lemony fava with crisp fried calamari, tomato fritters in little pies with fava sauce, Santorini omelette with grilled sausages, calf’s liver with a sauce of beetroot, vinsanto and fava, bream with greens and creamed capers roasted in parchment paper, fillet of fried cod with a brandade sauce – all accompanied by choice Santorini wines.

The second “course” concerns scheduled cooking lessons given at fixed times where mainly foreign visitors familiarize themselves with the products, dishes and wines of the island.

The third lesson emerged from an idea that occurred to Georgios Hatzigiannakis in 2015, when he celebrated Selene’s 30th anniversary. He created a showcase of Greece’s most interesting PDO and PGI products. Recognizing that Santorini is the country’s top tourist destination, with Selene being itself one of the island’s foremost tourist attractions, he thought of making the restaurant a kind of ambassador of quality Greek foods. At the special exhibition area/delicatessen, apart from local products like the Santorini fava, tomato, capers, pistachios, and of course Santorini’s wines, you will be able to see and buy samphire from Ikaria, tuna from Alonnisos, olives and oils from all over Greece, Corinthian currants, fleur de sel from Mesolonghi, Greek herbal tisanes, and much more. 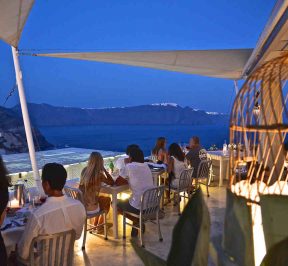 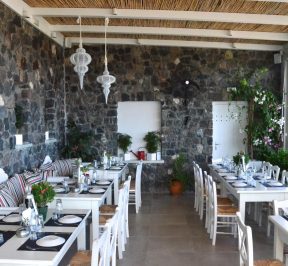 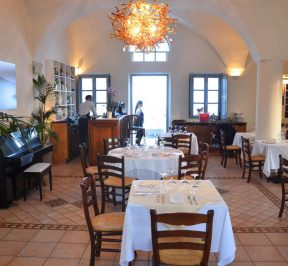