Nested in a lush hillside of Lefka Ori mountain range (Lefka Ori literally means White Mountains), approximately 500m above sea level and at just 18km away from Chania, the village of Drakona in the municipal unit of Keramia is where the traditional taverna of Ntounias, owned by Stelios Trilyrakis, is set.

It all started back in 2004 when Stelios Trilyrakis, a young professional cook who worked in Chania at the time, took the decision to return back to his village and dedicate himself to the small traditional taverna run by his parents.

Stelios had a plan of his own. Making the most of the experience and know-how of his mother and his grand-mother, his vision was to introduce a holistic approach to the taverna where the dishes offered would bear the ultimate traditional Cretan culinary stamp. Stelios decided to proceed following a three-axis strategy: raw materials coming from local produce (anything that can possibly be produced), dishes prepared in the most traditional way and signature flavours of Cretan cuisine.

First, he set up the kitchen. He equipped it with all necessary tools of the trade: parasies (in the Cretan dialect, parasia is a traditional way of cooking; a fire was set between two parallel rectangular stones; the cooking pan was placed on top of a steel cooking grate supported on the stones), wood-stoves and wood-ovens. There are no electric cooking appliances here and everything is cooked over wood burning fire. Then, Stelios organized the farm. He planted his own vegetable gardens and created areas to house free-ranging flocks, small local breed cows, goats and rabbits.

Ten years later, the taverna of Stelios, a.k.a. the traditional taverna of Ntounias, is a landmark in Crete.

To be honest, we wanted to meet Stelios since he is so famous. We drove through the amazing Gorge of Therissos, one the most beautiful routes, to get to the taverna.

Stelios was waiting for us in the yard. Besides, this is where the clay Dutch ovens are placed and this is where food is cooked, in the yard! If you happen to pass by, this spectacle will definitely make your head turn; you will be witnessing a true cooking show! Clients’ needs are immediate catered to from this strategically chosen supervisory spot. We were amazed! What an ingenious solution to lessen traffic congestion in the kitchen this was!

Just like in the theatre, Stelios stars in a beautiful theatrical play with only one leading actor.

Stelios is the one who will welcome you here, will give you the indispensable tour to the kitchen, so that you get to see the Dutch pots, the wood-oven, the tasty potatoes fried in Cretan olive oil; he is the one who will take your order, serve you, get you the bill … Nevertheless, the help of the girls and this wife working back in the kitchen is invaluable.

Whenever this multitasking maestro could spare two minutes, he would sit with us and describe to us the dishes he generally cooks. Due to his Cretan dialect, we almost had to look for a simultaneous interpreter …

Everything we ate here was divine and needless to say, made of seasonal produce; bread with local flour, award-winning rusks, gardoumakia (a special meze from lamb intestines), cauliflower with xynochondro (a Cretan cereal made of sour milk and cracked wheat), lamb baked in paper and much more.

With the restaurant overwhelmed at times, Stelios would say with a smile on his face:

“What can I do? Don’t look at me my friends! After all, this is what slow food is all about, isn’t it?” 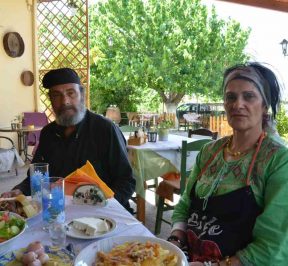