Citrus groves, vegetable farms, pasturelands, the olive groves of Tragea, the vineyards at the northern part of the island; the goods provided by the fertile nature of Naxos on the one hand and the produce of the farmers inhabiting the mountain villages of Filoti and Apeiranthos (calf, goats and sheep, dairy products, oil, olives, grapes, honey, citrus fruits, potatoes and other vegetables) on the other hand have formed through their longstanding presence the traditional cuisine of Naxos.

Even though Naxos is not such a large island like Crete for instance, what is most interesting is that the cuisine of Naxos did not used to be uniform. Well before there was a road network on the island to link together the villages of Naxos, the Naxian cuisine was divided into three categories. The cuisine of the coastal regions, where fish and sea food dishes prevailed; the cuisine of the plains where vegetable and cattle dishes had a leading role and were people used butter for cooking since the byres were located in the plains and, finally, the cuisine of the semi-mountainous and mountainous regions where goat and sheep dishes prevailed and where olive oil was used for cooking. 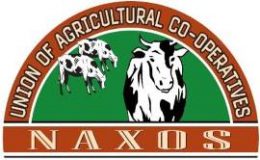 Among the products of the island, the dairy products of Naxos, the potatoes of Naxos and the kitron liqueur (a liqueur made from the leaves of citron tree) are famous and consumed throughout Greece. On the island of Naxos you can taste a long list of savoury dishes, such as:

From the meat dishes, pig rosto (garlic stuffed pork leg braised in wine), pork fricassee with provatsa (provatsa is the leafy part of sea lavender and grows in abundance around Greece, where it is also known as «amarando»), free-range rooster braised in wine, rabbit braised in lemon, goat served with potatoes or pasta, braised goat with macaroni (zoula), the «monk» – veal stew with eggplant and a variety of cheeses, veal stew. From the fish dishes, marinated chub mackerel, salachtouri (rays salad with lemon dressing), marinated anchovies, lobster pasta and char-grilled octopus.

A wide range of local products is used as side dishes, such as: freshly made salad (the Naxian sweet tomato has been given a starring role), local cheeses (Graviera of Naxos, arseniko, xynotyro, etc.), zamboni, the sublime Naxian cured meat (cured pork leg) and, last but not least, the ubiquitous famous Naxian potatoes.

Some dishes are closely associated with great religious celebrations. For example, «patoudο» (lamb stuffed with chard, fennel, local aromatic herbs and garlic from the Cyclades, cooked with Naxian olive oil and served with Naxian potatoes) is the main course on Easter Sunday. «Koukoulomaeria» (soup with white beans, wheat, corn and a great amount of olive oil) is mostly cooked on New Year’s and «sefoukloti» (a sweet pie with chards or wild greens, parsley, fennel, onion, mint, rice) on the 40-day Greek Orthodox Lenten fast.

Among the sweets and the desserts made on the island, melachrino is delicious. Melachrino is a kind of karydopita (a Greek walnut cake drenched in syrup) made with a small quantity of citron liqueur. It is usually served with «kaimaki» ice cream (ice cream made from mastic-resin and sheep’s milk). 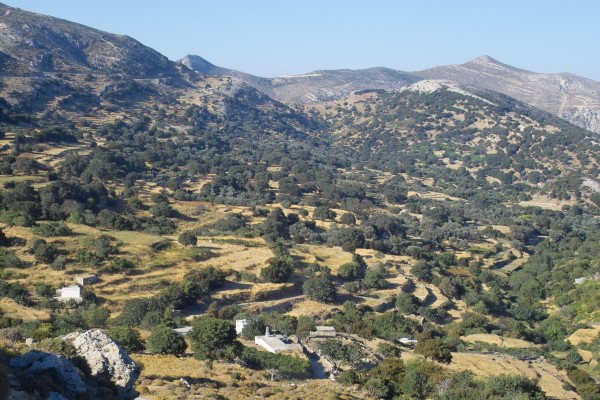