Island of lava and incredible beauties

In his Ode to Santorini in Orientations, Nobel laureate Odysseas Elytis describes the island as “Daughter of enormous rage… you emerged from the entrails of thunder shuddering amongst regretful clouds bitter stone proved, arrogant, proud.”

The first signs of life on Santorini date to 5000 B.C. when early settlements appeared in the southern part of the island on the Akrotiri peninsula. Sometime in the 17th century B.C. Akrotiri was destroyed by a mammoth volcanic eruption. The explosion released ashes and caused tidal waves that reached as far as Rhodes and Crete, covering the island in 6 metres of ash and resulting in the demolition of the center which sank into the sea; today only the Caldera or rim of the crater remains. Ironically the forces that caused the disaster also preserved the traces of this prehistoric civilization, which was not discovered until 1967 by the distinguished archaeologist Spyros Marinatos. Excavations since then have revealed only a fraction of a perfectly preserved city that had been buried for 37 centuries beneath volcanic ash. Often called Greece’s Pompei, the state was found to possess extensive knowledge of architecture, urban planning, pottery and art.

Finds from this fabulous civilization are on exhibit in the Museum of Prehistoric Thera and confirm the relationships shared with other Mediterranean civilizations.

Although all but deserted from Classical to Byzantine times, the island slowly began to come back to life, turning to piracy under the Venetians, who gave it its modern name, and wine production under the Ottomans.

In our own day, Santorini went into decline again. The Russians, who had been importing their sweet Vino Santo for Holy Communion, had no use for it under the Soviets, while its once-thriving cotton, weaving and tomato factories were abandoned as industry relocated to Piraeus after World War II. But above all, ruination came in the form of terrible earthquakes in 1956, resulting in appalling destruction and extreme poverty.

No one back then could have predicted even in their wildest imagination that the island would rebound and flourish a half a century later. Nowadays Santorini is one of the most impressive and popular tourism destinations worldwide. And once again the volcano that caused the abandonment is what transformed the island into an international attraction.

Startling but true, the eating habits of Santorini have been based for four thousand years on the pillars of the Mediterranean kitchen – olive oil, wheat and wine. The information that we have about the diet of the residents of prehistoric Thera come from three sources. The first is the paintings on the vases and walls found at Akrotiri, such as the fresco depicting the Young Fishermen from the West House. The second is the archaeological finds unearthed, which include fishing rods, hooks, and pierced stones that were used as weights (sinkers). And we also have the contents of the vases and jars which have been proven to hold both wine and oil. The third source is the organic remains from the site – animal bones, seeds, shells and plants.

Millennia later, the traveller Guillaume Olivier (1765-1814) in his two-volume Voyage in the Ottoman Empire wrote: ‘The best product of Santorini is their wine known as Vino Santo. It gets better and better as it ages. Nearly all the whole production is exported to Russia. Every year a million “okades” [an Ottoman measurement equivalent to 1.280 kilos] leave the island.

In our own day, the volcanic soil has endowed Santorini with a special range of local vegetables – white aubergines, liliputian courgettes, cucumbers and the tomato, whose only ‘irrigation’ comes from the humidity in the air – as well as the wild capers and the fava, split yellow pea, all characterised by their intense flavour.

The small tomato of Santorini is a separate species which comes from Egypt and is thought to have been brought to the island by Santorini sea captains on their return journey after delivering Theraic soil used in the construction of the Suez canal. Cultivation of the “waterless” tomato and the production of tomato paste formed the basis of Santorini’s economy along with grapes and wine during the whole first half of the 20th century. Needing little water, this tomato found Santorini’s conditions ideal for growth, and soon became popular with the farmers on the island. In 2013 the Santorini tomato was added to the European Commission’s list of PDO products thus becoming Greece’s 101st such product, paving the way for more development.

The fame of Santorini’s wines today rests on the unrepeatable marriage between the exceptional Assyrtiko grape and the island’s unique ecosystem. Santorini Assyrtiko is the ‘flagship’ of Greek wines and appears in three forms: The simple Assyrtiko which gives white wines a rich flavour, high acidity, a crisp metallic finish and discreet aromas of lemon blossom, lemon peel and citrus. Then there’s the Assyrtiko aged in oak barrels, which lend it aromas of nuts, apricot and vanilla. And finally, Vinsanto, a dessert wine, also aged in oak barrels, with hints of raisins, honey, coffee, ripe fig and plum.

A taverna staple all over Greece, the fava of Santorini is famous for being extra tasty, velvety in texture, incomparably sweet and quick to cook. It is a member of the pea family whose Latin name is Lathyrus Clymenum L. and, based on their finds, archaeologists excavating at the prehistoric site of Akrotiri maintain it was growing on the island 3,500 years ago. ‘Fava Santorinis’ was awarded PDO status (Protected Designation of Origin) in 2011 and is extremely nutritious, being rich in both proteins and carbohydrates. The relationship of fava and tourism is by now unassailable as it is one of the trademark products on which the gastronomic experience is based, contributing to the island’s reputation as the best gastronomic destination in Greece.

The fava of Santorini is famous for its rich taste, velvety texture, incomparable sweetness and quick cooking. Most commonly pureed and served as a dip sprinkled with lemon juice, olive oil and chopped onions, Santorini fava comes in many other guises: ‘married’ with onions, tomatoes and capers, with pork, with lard and tomato paste, with octopus, as a soup, with rice, in an omelette and ground as a base for fritters. Nowadays in the hands of young chefs of the island this humble legume has reached an apotheosis, and you may find it as a cream served in shot glasses, in crepes, pies and even ice cream! as well as in sophisticated compositions with meat, fish, game and seafood.

The medley of mezedes served on Santorini to accompany ouzo include tomato fritters, local fava puree (a PDO product), aubergine salad/dip made with white aubergines (the original ‘egg’plant), a salad of small local tomatoes (another PDO product) with caper leaves, and chloro, a fresh cheese.

On Santorini, where tomato production is such a thriving business – in the first decades of the 20th century there were ten tomato paste factories – it’s not surprising to find tomato dishes ranked high in the local cuisine. One such dish is tomato keftedes or fritters, where flour, finely chopped tomatoes, onions (green and dry), and herbs (oregano, thyme, mint) are mixed into a thick batter and deep fried in bubbling olive oil until golden brown. Of course, the recipe cannot be repeated with ordinary tomatoes; they are too watery and lack the intense flavour of those grown on the island.

Santorini producers, manufacturers and merchants working with flair and passion 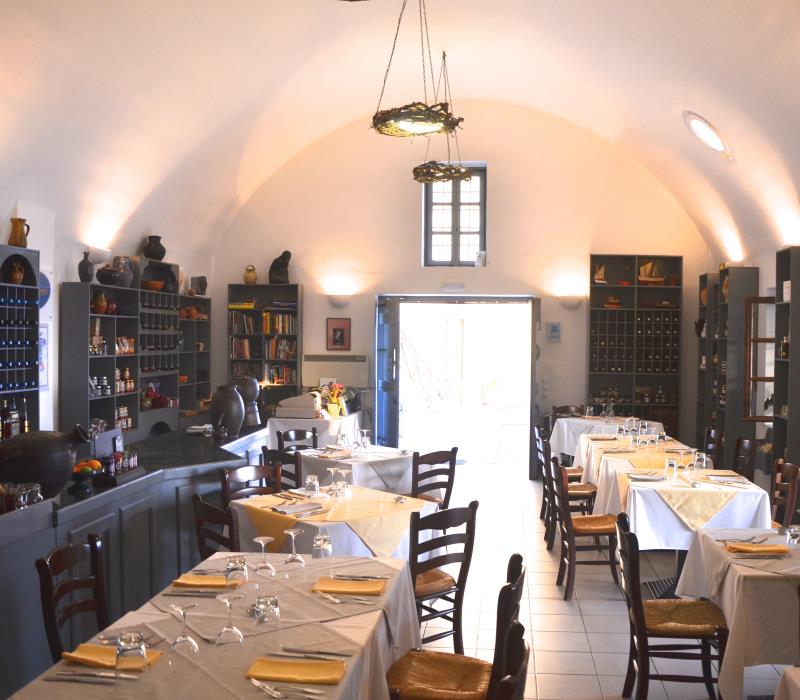