In Greek myth, god Apollo, worshipped with special affection by Naxiots, left on the island of Naxos his son Aristaios, who was an excellent cheese maker, to teach the islanders the art of cheese making.

Although tens of centuries have passed since then, Naxos, being an island blessed with fertile plains, abundant water resources, mountains with rich vegetation and endless grazing lands, is still characterized by a particularly developed livestock sector and produces some of the best-known Greek cheeses.

Together with other islands of the Cyclades, Naxos has a long tradition in cow milk cheeses dating back to the rule of the Venetians and their catholic governors who were the first to introduce such foods and their production method to the islands. In the 16th century, the Cyclades were the only region in Greece where dairy cows roamed on its fields, and thus, the inhabitants of these islands were put early on the right track to master the art of cow milk cheese making.

Nowadays, more than 10,000 cows graze on the land of Naxos while there are more than 100,000 free-ranging sheep and goats mostly on the island’s mountainous part, accounting for an annual production of 1,500 tonnes of cheese.

The most famous cheese of the island, serving as the island’s ambassador, is Graviera Naxou, which has been granted PDO (Protected Designation of Origin) distinction since 1996. The Greek name graviera is a transliteration of the Swiss gruyere. Graviera cheese is made from a combination of cow’s milk (up to 80% minimum), sheep’s and goat’s milk (up to 20% maximum). The cheese must be aged for at least three months. Graviera cheese is normally made into 9-kilo wheels but it comes in other forms as well.

Arseniko is another famous Naxian cheese, said to have been made for the first time in the 19th century. This cheese took its name, literally meaning masculine in Greek, after its strong flavour and hard texture, since cheese makers wanted to distinguish it from another cheese made also from sheep’s and goat’s milk, which, however, had a more elegant flavour, myzithra. On Naxos, arseniko cheese is made from a combination of sheep’s and goat’s milk which is heated and then set with rennet. The mass is drained in basket moulds from which it makes its final shape. Once the cheese is drained and becomes cohesive enough, it is dipped in whey again, rubbed with salt (others rub it with mashed pulp left over after pressing olives for oil) and left to age for at least three months. Arseniko is a wonderful grating cheese and table cheese.

Xynomyzithra (the name means sour myzithra) is a traditional fresh cheese made from goat’s milk. The cheese sets for 24 hours after milking. The Naxian xynomyzithra is rich and creamy with a slightly sour aftertaste which resembles yoghurt. The morning milk is strained and placed into moulds where a small quantity of rennet is added. The mixture is not heated and fermentation begins. The cheese is strained in cheesecloths (called tsantiles in Greek) and then placed into special baskets (called tsimiskia in Greek) usually made of rush. Xynomyzithra, being perishable, must be eaten within a few days.

Xynotyro (the name translates literally as sour cheese) is made from xynomyzithra which has been left to dry for several weeks until hardened. Xynotyro is used as a table cheese or as a grating cheese.

Tyrogalo, also called tsiros, is a whey cheese. Myzithra (a whey cheese made from either sheep’s or cow’s whey to which whole milk is sometimes added) is produced by dipping tyrogalo in boiling water. Myzithra, when allowed to dry, becomes anthotyro (a lightly salted cheese made with fresh whey).

The salt of the Aegean Sea feeds the island’s fauna endowing sheep and goat milk and, consequently, the cheese produced on the island with exquisite properties. The hot rays of the Greek sun favor the growth of bacteria necessary for cheese fermentation and, thus, the production of the unique cheeses made on this island. 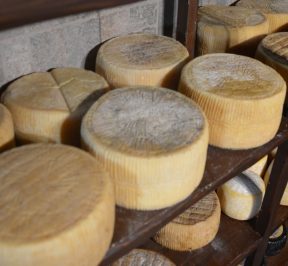 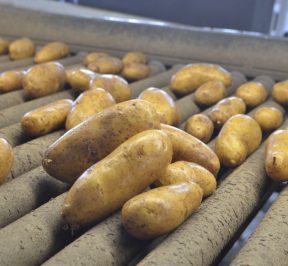